We return with Blogging Piemonte, the group of bloggers based in Piemonte writing about our (mostly) expat & (some) local lives here. This month’s theme is Carnevale!

In the US, Carnevale is something that happens down in New Orleans for a day or two. Lots of beads, everything is green and purple, people basically drink and play music all day—that was my impression (clearly, I never went to New Orleans for Carnevale or otherwise).

In Italy, Carnevale is a season and it’s celebrated throughout the entire country for several weeks. Celebrations begin on the Epiphany, or January 6, and last until Fat Tuesday, Mardi Gras, Martedì Grasso—the day before Ash Wednesday. 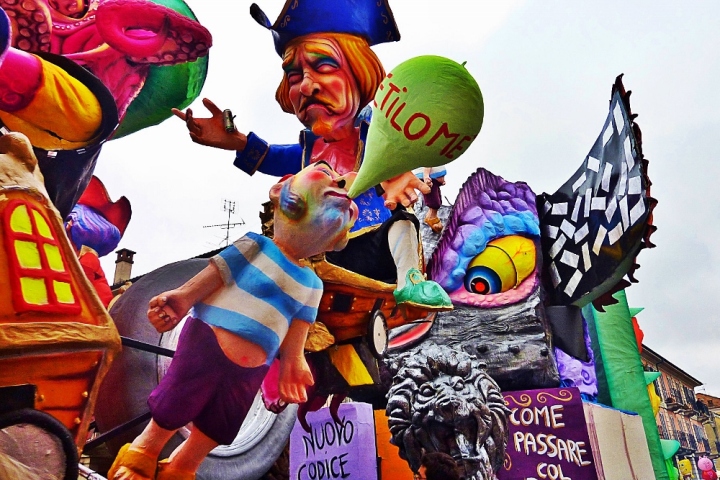 And it’s not a month of drunken revelry, but a schedule of traditional events like huge bean feasts, folk dances, and parades whose origins trace back centuries.

Venice has Italy’s most popular and most spectacular Carnevale, but there are plenty of other cities who put on an incredible show, too.

Take Santhià, for example: this city in northern Piemonte holds the region’s oldest Carnevale, dating back to the early 1300s.

The Carnevale of Santhià is most famous for its parade of allegorical floats during the last days before all partying stops (specifically, Sunday and Tuesday afternoon and Monday evening before Ash Wednesday).

Thousands of costumed people march through the streets with instruments, props, and floats, in groups created by the frazione (small towns around Santhià) that have their own rites and rituals going back hundreds of years.

Another one of Italy’s more famous Carnevales is the one in Viareggio (which I went to in 2009), which has since been “twinned” with the Carnevale di Santhià in 2013, marking its importance. 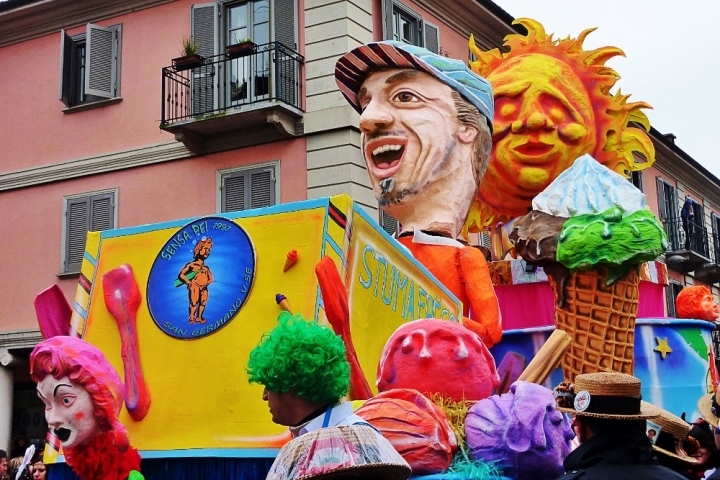 I went to the Carnevale of Santhià in 2015 during the last days of its celebration. The floats were elaborate and many of them were pretty funny, and if I had to recommend a Carnevale to see, Santhià would be on the list. Of course, nothing beats the one in Venice (and that of Viareggio is like Carnevale di Santhià x 5), but these “smaller” Carnevales have a lot of local fun to offer.

About every month, the Blogging Piemonte meets up to talk and decide on a topic we’ll all write about, from food and drink to travel and life in Piemonte. Follow along with the hashtag #BlogPiemonte!

Read up on what the others have to say about a day in the life in Piemonte (and check back as it’s updated!):

The Treasonous Past of the Famous Carnevale Figure Gianduja, by The Entire Pizza
Lettuce, Rags, and Lies in Carnival, by Turin Mamma
Carnivale in Piemonte Means Bugie! by Italianna
Ivrea: THE Carnival in Piedmont, by Turin Epicurean Capital
No Snow? Try Carnevale! by Living in the Langhe
At Carnival anything goes – Especially wine! by Uncorkventional
Carnevale…with kids? by Langhe Secrets

Are you a blogger who lives in Piemonte and writes in English?

We’d love to have you join Blogging Piemonte! Just send me an email at diana.zahuranec [at] winepassitaly.it.

It doesn’t matter if you also blog in another language, as long as you post the Blogging Piemonte articles in English.

10 thoughts on “The oldest Carnevale in Piemonte”