It’s finally over: I passed the written exam, esame di teoria, of the Italian driver’s license. Just typing that down makes me smile.

Now when I see road signs and I begin to recite in my head that this one is posted 150 meters before the crosswalk but the blue one is at the crosswalk, I stop myself. And I grin.

This is a monster of a post, but I wanted to include helpful information for other American expats. Anyway, I get to write a monster post if I want, because this was a beast of an experience. And it’s not over yet…I only have my permit; even though I’ve driven for over a decade, it’s still possible I don’t pass the practice part the first time (it has recently come to my attention that they may quiz me on such things as speed limits of three-wheeled buggies and other vital facts during the driving part).

I’ve mentioned before that if you’re an American with residency in Italy, you need to get an Italian driver’s license to drive. It’s not possible to convert your American one; you must start from square one.

After huffing and puffing over the unfairness of it all and using bikes, trains, buses, and the ragazzo’s car (as passenger of course) for five years, I couldn’t stand not driving any longer. I don’t particularly like or dislike driving; and the thought of driving in Italy is scary—I may never drive in Rome or anywhere south of there. Plus, I love walking. But it has become increasingly clear to me how many wine tastings in the middle of the countryside there are; how many fascinating villages I want to visit that are scattered everywhere; and how I just want to go to the store without lugging back bushels of vegetables that get crushed against my legs.

It was time to get a license. Patente B, to be exact.

Studying for the exam

In August 2015, I bought Patente A e B Multilingue Terza Edizione by Alberto Peluso (€19), the driver’s manual in Italian, English, French, Spanish, Albanian, Arab, and Chinese. In its entirety, I would later discover that this sept-lingual book was actually thinner than just the Italian version, which was not the best sign. On the other hand, seeing the English beside the Italian words helped me learn the vocab (by the way, the test isn’t offered in English).

I read it throughout September, ignoring the section about parts of the motor, and bought the exam book I Quiz dell’Esame per la Patente di Guida A e B by Antonio Messina (€16) in which every possible question is listed (over 7,000; nothing about motor parts—good thing I didn’t waste time). I just started going through it. 45 minutes to an hour every day, 6 days a week (minus things like Christmas vacation) until around February. I hated it, but for some sadistic reason I kept telling myself I was committed. 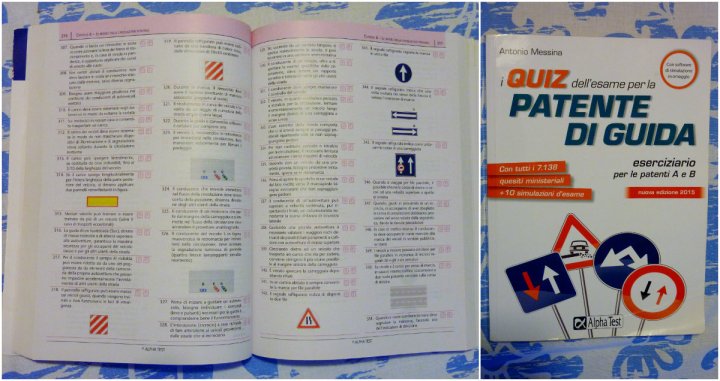 The exam book came with super helpful software. Of course, 2015 had turned into 2016 by then, and who knew how many rules had changed because Italian bureaucracy is made of rules. I figured they couldn’t change 7,000, so just kept plugging along with my book, which had become my frenemy. I couldn’t replace it with a new one!

The software simulates the 40-question exam and you may pass with up to four incorrect answers. My advice? Do it until you average 39, and take notes. Then I began the process of scheduling my exam, because of course, it is a process.

How long I studied, excluding vacations: est. 5 months, 45 min to 1 hr a day, 6 days a week. Exaggerated? I don’t know. I just knew I didn’t want to fail.
State of Mind: annoyed, frustrated, then eventually encouraged as I began remembering things

How to schedule the written exam

For the aspiring driver in Italy—technical, detailed, useful

Rub your belly clockwise while patting your head and singing Ave Maria. Then, go to the local DMV for info (note: this post relates to Turin’s Dipartimento della Motorizzazione and reflects that I chose to do this privately, not through an autoscuola, which costs like €500). The info they give you will be 10 years out of date, but they won’t tell you that; for this information, go to a local autoscuola. Make friends with them, because they’ll help you get your packet together; plus you have to go through an autoscuola for driving lessons.

You need the packet (Italians, in my experience, are fond of packets composed of many different documents), which includes: the form they give you, 3 pictures for the license, receipts from various payments that I never understood the purpose of, a medical certificate; plus a photocopy of your carta d’identità and your permesso. Don’t get angry at me if they change this; be sure to check with the DMV ask your local autoscuola.

Double-check everything with your friends at the autoscuola, and then head to the DMV.

Number of trips to the DMV total: 5.
State of mind: Calm and collected. I checked all the boxes and know that dealing with Italian bureaucracy only requires two things: patience and persistence. You’d do well to remember that, young grasshopper.

I woke up at 6:30 for my 9:30 exam to study before breakfast and to make sure I caught the bus that passed by only twice an hour. I tried not to think that the night before, I had quizzed myself until my eyes bled and did not get a single 40. Eep! Shh. Don’t think.

When I arrived at the DMV, I put on a gas mask to pass through the crowd of people nervously smoking outside the exam room. The first exam was 30+ minutes late so I sat out there a nervous wreck; but I was happy to see the room wasn’t full of 18-year-olds, but a healthy mix of ages. This was also when I saw the book everyone else had studied, which was considerably more in-depth. Too late now.

Finally, the first exam takers exited; we waited with them for the results, which they received cheering or dying, an agony to watch. Then they began calling us in one. By. One. It was this small woman who whispered from the far end of the computer-filled room, and each person took several minutes to get individual instructions. I was the very last one to enter (Z last name).

After she whispered further instructions to us all, I started to feel better because the exam was exactly like the million simulations I did. Familiarity breeds, in this case, confidence (also contempt, so much contempt for those quizzes). And, notwithstanding the distraction of a girl sitting across from me who was the only one out of 50 people to make despairing comments every 30 seconds (whisper-woman got onto her constantly because you couldn’t talk, but the girl kept going), I finished in four minutes!

I checked it over twice, spotted two mistakes because I read the Italian incorrectly, then left. The rest of the 30 minutes is a haze; I have no idea what I did while waiting. Either committed a crime or read my Kindle, I guess.

Then, around 11:30 that morning the woman whispered to me that I passed and the rest of April has been a beautiful, perfect, sunny month! I’ll know miracles exist if I don’t need to relearn parallel parking. At least I can already drive a manual transmission.

Number of hours I felt like (insert emotions below): 5 hours
State of mind: The whole range, in this order: anxious, despairing, exasperated, nervous, elated! Then I was exhausted for the rest of the day. Emotions are hard, people.

What’s next? The practical exam. To see how to pass it, check out this post: How to get a driver’s license in Italy, Part 2